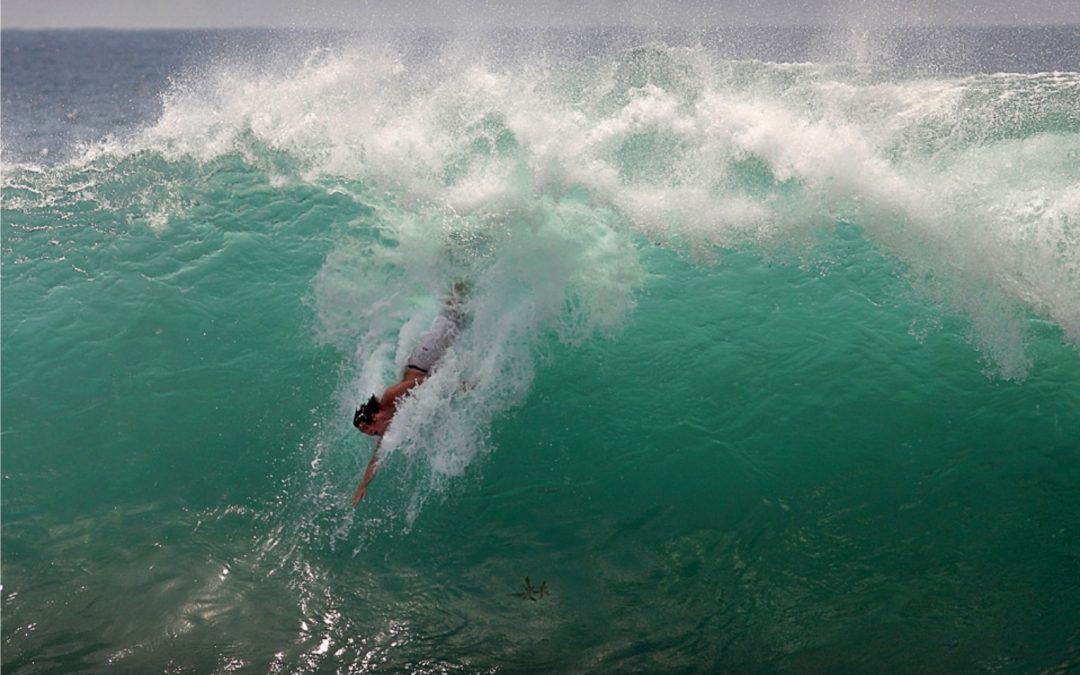 If anyone of my friends, at 13, could take on a 20 foot wave and live to tell about it, it was Jim. So, I followed him into the ocean trusting my instincts. I dove under wave after wave trying to keep up with Jim but that was futile. He was a much stronger swimmer and these waves kept tossing me back onto the beach like I was a worthless piece of kelp.

It took me what seemed like an hour to finally reach Jim. Of course, he had been there awhile surveying the best spot to tempt fate. He waved at me and yelled over the sound of the violent ocean, “Isn’t this awesome?” Awesome was not the word I wanted to holler back at that moment.

“Okay, here comes a big one. Let’s do this!” Jim announced. And, as if the wave heard him, it began to lift us to its peak. When I saw the drop to the bottom was a good fifteen to twenty feet down I pulled back barely releasing myself from its grip, but not Jim. I lost sight of him from the back of the wave but could hear him yelling “Yeehaw!” as he slid down the face of wave. I watched intently as the wave crashed down to the ocean below and became a twenty-foot wall of whitewash that slammed against the pier sending water (and hopefully not Jim) high into the air. The noise was deafening! I watched and waited for Jim to surface – nothing. It took a good 30 seconds for Tim to finally pop up, and my heart to start pumping again! We were now separated by a good 100 feet, but I could still hear him yell over the sound of the crashing surf, “Go for it!” Which I did.

Another wave came and even though the drop to the bottom was a big as before, I didn’t pull out, I went for it. I can still remember the fear and excitement that rushed through me as I slid down the face of the biggest wave I had ever attempted – which was scary – and awesome – and scary all at once! And, just when I thought I had things under control the wave decided fun time was over and it came crashing down on top of me, pulling me under and tossing me around like a rag doll. I couldn’t fight, swim or even get a sense of direction for a good fifteen seconds. I truly feared for my life and prayed I’d find the surface before I ran out of air. I remember to this day the helpless feeling of not knowing if I was going to live through this. I also remember the incredible feeling of breaking the surface, taking a life-saving breath and realizing I just might be okay!

I looked to the shore and there was Jim, along with a few angry lifeguards, waving at me. He was cheering – the lifeguards weren’t. That was Jim. He was constantly getting me in over my head and then cheering for me when I succeeded. We all need people like that in our lives, don’t we? Remember this, your kids do, too. Whether we like it or not.

Yes, it was dangerous. Yes, we were probably stupid to attempt such a thing. No, I never told my parents what happened…not right away.

ANOTHER LESSON LEARNED for PARENTS

Your kids aren’t going to share everything with you. At least, not right away. Did you? I know you have told your kids they can tell you anything. I know you’ve promised not to get mad. I know you’ve pounded into their heads honesty is the best policy and, for the most part, they know it. But, there will be things that happen that need to stay hidden, or, at least, they think they do. Those little deal-breakers that make them think, “No, this is too big for even MY parents to be cool with!” All you can do is trust in honesty, and work on the bond between you and your children daily. Continue to offer an open-door policy and, eventually, they’ll walk through it.